Roman Aristocrats in Barbarian Gaul: Strategies for Survival in an Age of Transition Ralph Mathisen 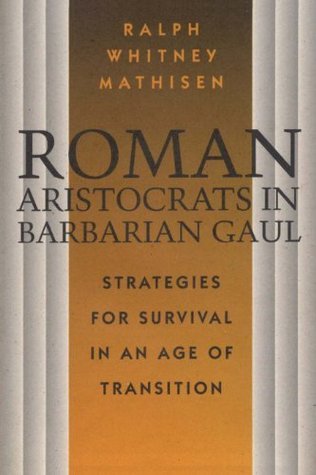 In this pioneering study, Ralph W. Mathisen examines the fall in one part of the western Empire, Gaul, to better understand the shift from Roman to Germanic power that occurred in the region during the fifth century ADMathisen uncovers two apparently contradictory trends. First, he finds that barbarian settlement did provoke significant changes in Gaul, including the disappearance of most secular offices under the Roman imperial administration, the appropriation of land and social influence by the barbarians, and a rise in the overall level of violence.

Yet he also shows that the Roman aristocrats proved remarkably adept at retaining their rank and status. How did the aristocracy hold on?Mathisen rejects traditional explanations and demonstrates that rather than simply opposing the barbarians, or passively accepting them, the Roman aristocrats directly responded to them in various ways. Some left Gaul. Others tried to ignore the changes wrought by the newcomers.

Still others directly collaborated with the barbarians, looking to them as patrons and holding office in barbarian governments. Most significantly, however, many were willing to change the criteria that determined membership in the aristocracy. Two new characteristics of the Roman aristocracy in fifth-century Gaul were careers in the church and greater emphasis on classical literary culture.These findings shed new light on an age in transition.

Mathisens theory that barbarian integration into Roman society was a collaborative process rather than a conquest is sure to provoke much thought and debate. All historians who study the process of power transfer from native to alien elites will want to consult this work.

Comments
Comments for "Roman Aristocrats in Barbarian Gaul: Strategies for Survival in an Age of Transition":